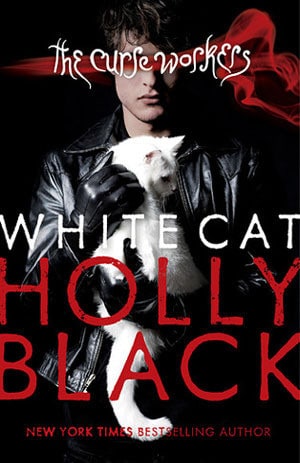 Published May 4, 2010
Review by Michelle

Cassel comes from a family of curse workers — people who have the power to change your emotions, your memories, your luck, by the slightest touch of their hands. And since curse work is illegal, they’re all mobsters, or con artists. Except for Cassel. He hasn’t got the magic touch, so he’s an outsider, the straight kid in a crooked family. You just have to ignore one small detail — he killed his best friend, Lila, three years ago.

Ever since, Cassel has carefully built up a façade of normalcy, blending into the crowd. But his façade starts crumbling when he starts sleepwalking, propelled into the night by terrifying dreams about a white cat that wants to tell him something. He’s noticing other disturbing things, too, including the strange behavior of his two brothers. They are keeping secrets from him, caught up in a mysterious plot. As Cassel begins to suspect he’s part of a huge con game, he also wonders what really happened to Lila. Could she still be alive? To find that out, Cassel will have to out-con the conmen.

Holly Black has created a gripping tale of mobsters and dark magic where a single touch can bring love — or death — and your dreams might be more real than your memories.

My thoughts:
White Cat is the first book I’ve read by Holly Black and I enjoyed it. It took me a little while to get into the story – maybe because I was listening to it on audio and I wasn’t connecting with the reader all that well. The world that Black created, taking our world now and adding workers to it, was very unique.

We first meet Cassel Sharpe on the roof of his dorm trying to find his way down after sleeping walking (so he assumes) up there. Cassel is from a family of workers and he is the odd man out – he doesn’t have any special “gifts”. Cassel’s family is entertaining and unique and keep you interested in the storyline. He has two brothers – Philip who is  married with a baby and Barron who is going to school to study law. Cassel’s mom is in jail for working men for money and his father is dead. So, when Cassel’s school kicks him out for being on the roof and almost dying (they don’t want the lawsuit on their hands) – his Grandfather comes to the house to stay with him. His grandfather is a worker as well – he was a death worker and has the scars to show for it.

Workers are people in society with a set of “skills” that allows them to change the lives of the people around them with just a touch. Some workers can change your luck while others can make you fall in love or even kill you with a touch. Since working is done through touch everyone in society wears gloves and touching people without gloves can get you in loads of trouble.

Cassel is such a wonderfully tragic character – he is haunted by the knowledge that he has killed someone, his friend and girl he liked, Leila, a few years prior. Ever since the accident, Cassel’s brothers have treated him differently and Cassel doubts everything about himself – how could he kill the girl he thought he was in love with and not even remember it? Philip and Barron are horrible humans – Philip is working his wife and they are both in the workers equivalent of the mob.

While Cassel is home from school, a white cat appears and talks to him in a dream – making him doubt everything he knows about his family and life. As Cassel searches for answers about his past and present he is drawn deeper into the world of Curse Workers – and sees a side of that world he didn’t know he was a part of.

This book started out slow for me but once it picked up I couldn’t stop listening. I really loved Cassel’s character and I thought the world Black created was just so unique. I also loved the characters – nobody was what they seemed and Cassel had such a interesting and tragic story. If you haven’t read this book you definitely should – and don’t let the beginning put you off – it is a fabulous read.