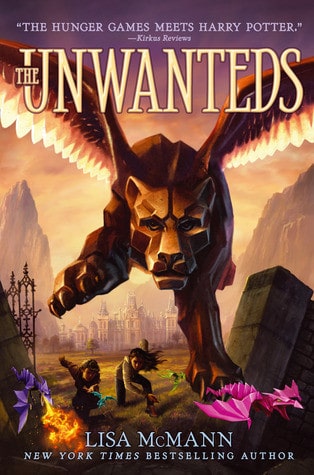 Every year in Quill, thirteen-year-olds are sorted into categories: the strong, intelligent Wanteds go to university, and the artistic Unwanteds are sent to their deaths.

Thirteen-year-old Alex tries his hardest to be stoic when his fate is announced as Unwanted, even while leaving behind his twin, Aaron, a Wanted. Upon arrival at the destination where he expected to be eliminated, however, Alex discovers a stunning secret—behind the mirage of the “death farm” there is instead a place called Artime.

In Artime, each child is taught to cultivate their creative abilities and learn how to use them magically, weaving spells through paintbrushes and musical instruments. Everything Alex has ever known changes before his eyes, and it’s a wondrous transformation.

But it’s a rare, unique occurence for twins to be separated between Wanted and Unwanted, and as Alex and Aaron’s bond stretches across their separation, a threat arises for the survival of Artime that will pit brother against brother in an ultimate, magical battle. –Goodreads

The Unwanteds by Lisa McMann is a fun, imaginative story that is perfect for the middle grade reader. Even though I don’t quite agree with the “Harry Potter meets The Hunger Games” blurb, The Unwanteds is a creative tale that will be engrossing to young readers – especially the musically and artistic inclined since there are not a lot of books that put such a positive spin on these creative traits.

McMann creates a fun world full of magic, friendship, and danger. When Alex becomes an Unwanted, he is sent to the death farm with the rest of the Unwanteds – what he doesn’t know is that they death farm is actually a hidden school for all the Unwanteds. At the school, they are taught to use their artistic abilities to create spells and weapons to defend the school – in case the Wanteds ever find out about them. The spells and weapons that the students create with their magic is very imaginative on McMann’s part.

The characters are fun and have some baggage attached to them – especially Alex, whose twin brother remains behind in Quill. Alex misses him and wants to find a way to bring Aaron to Artime – even though Aaron is one of the bad guys now (which Alex doesn’t know). The other characters all have interesting backgrounds and stories that will keep the reader engaged and wanting to know more about them.

I listened to The Unwanteds on audio and I loved Simon Jones as the narrator. He really brought the story to life the way he read each character and each story line. He brought the right level of excitement, suspense, and fear to the story when it was required and made the story fly by.

I bought this book for my middle school library and several of them have brought it back singing it’s praises! McMann has definitely found her audience with The Unwanteds.