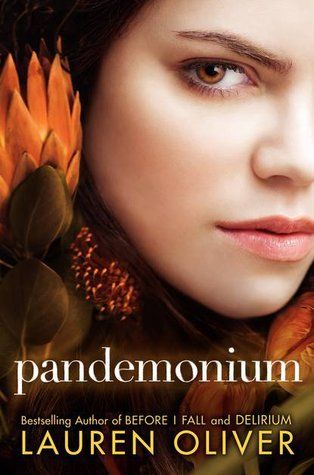 Lauren Oliver captivated readers with Delirium, the first book in a thrilling dystopian trilogy in which Lena Haloway dared to fall in love with Alex and escape the cure, the government-mandated procedure that renders a person immune to the disease of love. Lena and Alex staked their lives on leaving their oppressive society, but only Lena broke free.

Pandemonium continues Lena’s gripping story. After escaping from Portland, Maine, Lena makes it to the Wilds and becomes part of an Invalid community, where she transforms herself into a warrior for the resistance. A future without Alex is unimaginable, but Lena pushes forward and fights, both for him and for a world in which love is no longer considered a disease. Swept up in a volatile mix of revolutionaries and counterinsurgents, Lena struggles to survive—and wonders if she may be falling in love again.

Full of danger, forbidden romance, and exquisite writing, Lauren Oliver’s sequel to Delirium races forward at a breathtaking pace and is sure to appeal to fans who crave the high-stakes action of The Hunger Games and the bittersweet love story of Romeo & Juliet. –Goodreads

OMG, y’all. This book totally blew me away. Really. It is my favorite book of the year by far. There is SO MUCH AWESOMENESS in Pandemonium. Even better than Delirium in my opinion – and I loved Delirium. But Lauren Oliver WENT THERE with Pandemonium and it will blow. your. mind. I’m still thinking about this book and it’s been over a week since I finished.

When Lena emerges into the Wilds – nothing is how she imagined it would be. Alex is gone and her heart is broken. Shattered. When Raven and the other “invalids” find her she is half dead and really just wants to stay that way. As she regains her strength she accepts her new life in the Wilds and becomes a member of the Resistant – moving to New York and emerging herself in the fight against everything that she once believed in. What she doesn’t expect is what happens next – and must fight to stay alive and escape what will most certainly be her death.

Oliver’s writing is FLAWLESS. From the very first chapter she grabs your attention and keeps it. Pandemonium is written in a switching time frame – one chapter is “then” and one chapter is “now” and it flows effortlessly. I would find myself wanting to know what was happening in the “then” when I was in the “now” and vise versa. The “then” is about how she found her way. The “now” is about how she is strong and not the same girl we saw in Delirium. She has became a warrior for the resistance and since they took Alex from her she will do whatever she can to take them down.

Since the blurb tells you about the romance – I’m only going to say a few things about it. First, I love Alex. In Delirium, we see how Alex is perfect for Lena but at the end of Delirium he is captured and probably killed. Lena is heartbroken – like doesn’t want to live anymore, let me die – heartbroken. She goes on with her life – but doesn’t forget. When she is put into a dangerous circumstance with an unlikely companion, things start to change. She starts to let her heart heal – even while she is fighting to survive. The relationship that starts to bloom is what she needs. And I ADORED it. Absolutely and totally fell in love with this “forbidden romance.”

Pandemonium is everything that a sequel should be – engaging, heart pounding, and completely captivating. I can’t remember the last time I read a book so fast and was so completely enchanted with the characters and story.