Welcome to Day #4 of House of Night Reviews!
*This review contains spoilers for the previous books* 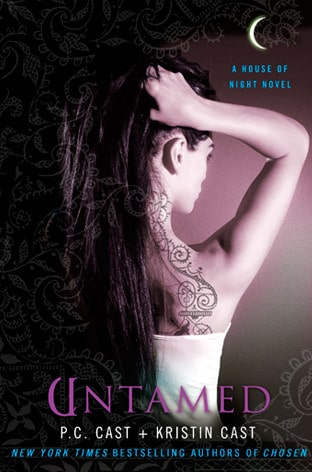 Life sucks when your friends are pissed at you. Just ask Zoey Redbird – she’s become an expert on suckiness.

In one week she has gone from having three boyfriends to having none, and from having a close group of friends who trusted and supported her, to being an outcast. Speaking of friends, the only two Zoey has left are undead and unMarked.

And Neferet has declared war on humans, which Zoey knows in her heart is wrong. But will anyone listen to her?

Zoey’s adventures at vampyre finishing school take a wild and dangerous turn as loyalties are tested, shocking true intentions come to light, and an ancient evil is awakened in PC and Kristin Cast’s spellbinding fourth House of Night novel. – GoodReads

My Thoughts on Untamed (House of Night #4)

Zoey goes into this book with a lot of problems – she lost her virginity to her teacher who turned out to be seducing her for Neferet, she broke her Imprint w/Heath who is now pissed at her, Erik saw her having sex with Loren, and the “geek squad” is pissed cause she’s kept everything a secret.

And on top of that Aphrodite is now unmarked and Stevie Rae is undead but a new kind of red vampyre. Throw in a new kid at the school, Stark (who I absolutely love) and evil things in the night and you have one very interesting storyline and a book that is much better than the previous book.

The Main Characters in House of Night

I love that the Cast’s have introduced some new characters – Stark and the nun, Sister Mary Angela – who have added a little more intrigue to the story while also making Grandma Redbird a more important part of the story.

The road the Cast’s are starting to take the characters down in this book is very interesting – with Aphrodite turning back human, Stevie Rae a new kind of vampire, and Neferet definitely evil and crazy – the story just got a whole lot more interesting for me.

Overall, up to this point, this has been my favorite book in the series – definitely better than book three. They really took the characters down a whole new road and introducing new characters into the mix made the series that much better.

Come back tomorrow for day #5 of House of Night Reviews!