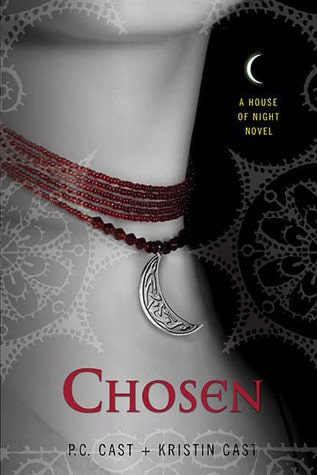 Welcome to Day #3 Chosen (House of Night) Reviews!
*This review contains spoilers for the previous books*

Goodreads Description:
Dark forces are at work at the House of Night and fledgling vampyre Zoey Redbird’s adventures at the school take a mysterious turn. Those who appear to be friends are turning out to be enemies. And oddly enough, sworn enemies are also turning into friends. So begins the gripping third installment of this “highly addictive series” (Romantic Times), in which Zoey’s mettle will be tested like never before. Her best friend, Stevie Rae, is undead and struggling to maintain a grip on her humanity. Zoey doesn’t have a clue how to help her, but she does know that anything she and Stevie Rae discover must be kept secret from everyone else at the House of Night, where trust has become a rare commodity.

Speaking of rare: Zoey finds herself in the very unexpected and rare position of having three boyfriends. Mix a little bloodlust into the equation and the situation has the potential to spell social disaster. Just when it seems things couldn’t get any tougher, vampyres start turning up dead. Really dead. It looks like the People of Faith, and Zoey’s horrid step-father in particular, are tired of living side-by-side with vampyres. But, as Zoey and her friends so often find out, how things appear rarely reflects the truth…

My Thoughts:
The third book in the series is another fun read – put probably my least favorite in the series. There are some things that bother me – like how the authors go back and tell the read everything that has happened in the previous books. Really – I remember what happened. Why would I start a series with book three? I tend to skip over these parts but they are still annoying.

Okay – rant over.
This book picks up where book two ended – with Zoey dealing with three boyfriends (and she called Aphrodite a slut? really?) while also dealing with an undead best friend and figuring out what to do about the evil Nefertiti. Even though Zoey has all this to deal with most of the book is pretty slow – not a lot happening and a lot of worrying about the three boyfriends. I also do not understand her infatuation with Loren Blake – her teacher – and the ending of the book really caught me by surprise.

I do love Zoey’s relationship with Stevie Rae and how she doesn’t give up on her BFF even though she is an undead kid. Their relationship is probably one of my favorite things about the books. Stevie Rae keeps Zoey grounded and helps her deal with all the drama in her life.

Overall, not my favorite book in the series. Kinda slow – with really no Nefertiti causing drama (even though we do see that she’s behind a lot of the drama that does happen.) This one is kinda hard for me to review – not much happened and I can’t really remember the details. This book was more like a lead in into the next book and building up backstory for the rest of the series.

Come back tomorrow for book #4!