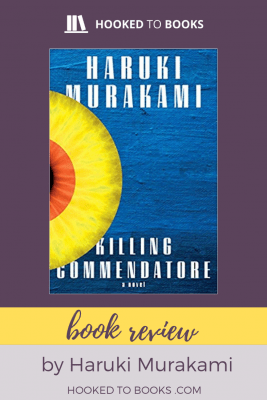 The novel focuses upon a portrait painter who wishes to paint abstract art and settles down temporarily in an isolated house which once belonged to a famous Japanese painter.

While he tries to capture his creativity on canvas, bizarre events keep happening in the area. As the unnamed protagonist struggles with claustrophobic nightmares, eventful love life and discovers a world beyond paintings, the story, moves forward in the direction of discovery.

Why the weird name “Killing Commendatore”?

The main plot of the book revolves around a painting “Killing Commendatore” which has been stored up in the attic by a painter whose life turned around in difficult circumstances in Vienna. However, the painting is more than just an art, and most of Murakami’s Kafkaesque surrealism is brought to life through the stokes of this painting. One can draw a parallel connection between the Japanese-style figures in the painting and the characters in the book.

Commendatore itself is also a character in the book or should I say, “an idea”? Explaining Murakami would be like trying to describe what a banana tastes like. You have to eat it yourself to know. Such concepts that the author introduces in the book through means of simple writing style is surprising to some extent and amazing to other.

What’s with the fictitious characters?

The fantastic part of the characters in Killing Commendatore is that they look and seem completely realistic and lifelike on the surface, but when you dig a little deeper, the scenario is somewhat different.

The portrait painter who aspires to be a better artist has indifference and lack of surprise, in even the most bizarre situations.

His wife who wishes to get separated is fickle-minded and lacks emotions.

The control-freak and neat-freak dominant neighbor got meticulous grand plan all pointed out to how surreal these characters were because no human can think that far.

An old Japanese painter whose brain is mush, and a two-feet tall Commendatore — this doesn’t even need to be explained.

The way those characters appeared on paper and interacted with one another, it seemed like a daily routine for any one of us, but the entire novel does not have even one moment of heightened emotion or emotion at all. Reading about them living their lives is like seeing it all happen underwater as if each character is struggling for air.

Plot or lack of it

One does not generally read a Murakami novel for some fast-paced or intricate plot setting. The premise is also usually the same, set in either an isolated place in the forests or Tokyo city. However, what Murakami lacks in plot, he makes up for in writing. Even in Killing Commendatore, there are such beautiful sentences and quotes which makes one swoon in awe of how someone can write so good.

“Instead of a stable truth, I choose unstable possibilities.”

There was so much depth in each sentence.

“Look deep enough into any person, and you will find something shining within.”

The prose of Killing Commendatore while bland at times, is quite striking in some chapters. The initial chapters of the book are more engaging as they create a sense of mysticism and lay the foundation for an intriguing read.

The entire book in 3 sentences

If I had to explain it in three sentences, Killing Commendatore is a book about a painter whose uneventful life leads to him creating portraits, but because of his creative ability and insights and some incredible turn of events, there is a drastic change in his life. Inspired by the weirdness around him, he creates masterpieces while being haunted by a masterpiece of a Japanese painter whose figures come to life and have a unique world of their own. Along with that, there is an intensity in the book with regards to past relations and indifference to the present ones as if the characters are more interested in what is invisible, lost or yet to be found than what is evident and readily in front of them.

Is the book truly Murakami?

When you think about the crazy characters and instances, the book couldn’t have been written by any writer other than Murakami but compared to his other masterpieces like Kafka on the Shore, Sputnik Sweetheart and After the Dark, Killing Commendatore does not fall through.

The plot is bland, prose quite simple and ordinary and even the surrealism is not as shocking as Murakami’s usual works. I had one phrase for all Murakami writings, “Reading Murakami is like waking from a dream. The dream may be beautiful, haunting or you might even forget half of it once you wake up (finish the book), but while you’re in it, it is the most real thing.”

One thing I had always liked about Murakami’s novels were the way they ended abruptly, leaving a lot of loose ends behind. It was so much like life. You only got to see some scenes of the character’s life, and then they went ahead with their life beyond the pages of the book. However, Killing Commendatore lacked that as well. The ending was quite nicely summed up, creating a synchronization among all events and a somewhat logical explanation for the plot which killed its magical, dreamlike quality.

To conclude, the book was Murakami’s least likable one because it seems as though he was forced to write something to live up to the expectations of the readers and in doing so, failed to be at ease with his writing.