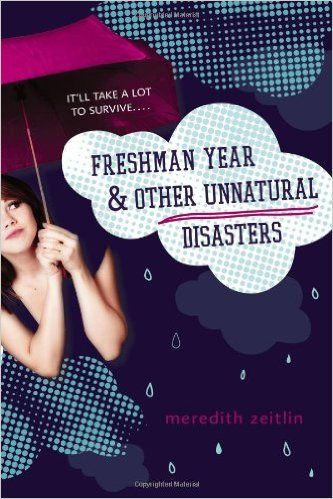 Kelsey Finkelstein is fourteen and FRUSTRATED. Every time she tries to live up to her awesome potential, her plans are foiled – by her impossible parents, her annoying little sister, and life in general. But with her first day of high school coming up, Kelsey is positive that things are going to change. Enlisting the help of her three best friends — sweet and quiet Em, theatrical Cass, and wild JoJo — Kelsey gets ready to rebrand herself and make the kind of mark she knows is her destiny.

Things start out great – her arch-nemesis has moved across the country, giving Kelsey the perfect opportunity to stand out on the soccer team and finally catch the eye of her long-time crush. But soon enough, an evil junior’s thirst for revenge, a mysterious photographer, and a series of other catastrophes make it clear that just because KELSEY has a plan for greatness… it doesn’t mean the rest of the world is in on it.

Kelsey’s hilarious commentary throughout her disastrous freshman year will have you laughing out loud—while being thankful that you’re not in her shoes, of course.

Judy Blume. That was my first thought while reading this book. Meredith Zeitlin writes like Judy Blume. And it’s totally awesome. This book so perfectly captures freshman year of high school and all of its awkwardness and hope and excitement and fear. Because what is high school if not every single emotion condensed into, basically, one day? Every morning you wake up and by the time you go to sleep you have probably gone through everything. High school, particularly that first year, is a turbulent time, and in this book we are right there feeling it all again (while being so glad we’re past that point).

Kelsey is a great narrator. She’s confident while not being cocky and she’s hopeful while remaining realistic. Nothing at all goes according to her plans and by the end of the book she learns that maybe things work out even better than she could have planned. Kelsey and her friends are completely believable and relateable from the very beginning. Reading this book brought back so many memories, like stalking crushes and prank phone calls that dissolved into giggles and those first sips of unsupervised alcohol and the friends who would show up to Prom to rescue you from a disasterous evening. Not that I was invited to Prom as a freshman, but you know what I mean.

The mysterious photographer will make you swoon and you’ll hate the evil junior and you’ll laugh when everything in the school play goes awry. While I absolutely would not want to have to go through high school again, I would definitely read this book again and, if given the chance, go along on more adventures with Kelsey and her friends.