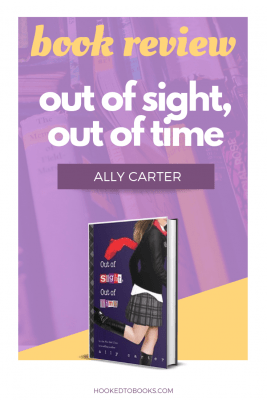 Out of Sight, Out of Time (Gallagher Girls #5)

The last thing Cammie Morgan remembers is leaving the Gallagher Academy to protect her friends and family from the Circle of Cavan–an ancient terrorist organization that has been hunting her for over a year. But when Cammie wakes up in an alpine convent and discovers months have passed, she must face the fact that her memory is now a black hole. The only traces left of Cammie’s summer vacation are the bruises on her body and the dirt under her nails, and all she wants is to go home.

Once she returns to school, however, Cammie realizes that even the Gallagher Academy now holds more questions than answers. Cammie, her friends, and mysterious spy-guy Zach must face their most difficult challenge yet as they travel to the other side of the world, hoping to piece together the clues that Cammie left behind. It’s a race against time. The Circle is hot on their trail and willing stop at nothing to prevent Cammie from remembering what she did last summer.

MY FAVORITE IN THE SERIES

When we saw Ally Carter last week, she suggested that the progression of these books was something like, “introduction, darker, darker, much darker, and HOLY CRAP.” And you guys. Holy. Crap. This book takes these characters to a whole new level and, honestly, it was my favorite of the Gallagher Girl Series thus far. Maybe it was because the action was way high stakes, maybe it was the globe-trotting, but this one kept me turning the pages until I finished. Which, okay, not necessarily different from how I read the other ones, but, you know.

Cammie doesn’t remember anything from the time she left Gallagher Academy to when she wakes up in the convent. Returning to the school she must win over her friends again and re-evaluate the relationships in her life. What’s worse is that she needs to discover who to trust and who not to trust. But if we’ve learned anything in this series it is that things are not always what they seem. With the help of Bex, Liz, and Macy (and, of course, Zach, Abby, and Cam’s mother), Cammie must retrace her steps and try to remember what happened to her in order to determine if everything (and everyone) is finally safe again. The things they find surprise them. They are led on a chase that leads them to believe maybe things aren’t as resolved as they had hoped. And perhaps, Cammie’s mother was right when she said it would be best if she didn’t remember.

I’m super sad that after this there will be only one more, but seeing where she left Cammie this makes perfect sense. The next book will finish out senior year at school and, you guys… I just really have NO IDEA what can possibly come in the next book. But I’m super excited to find out.