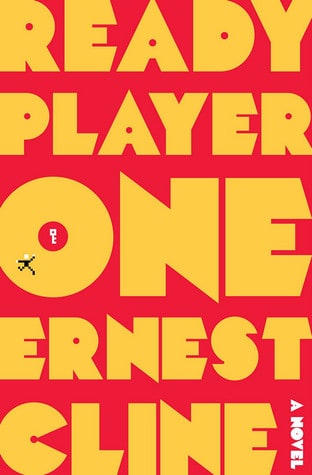 Like most of humanity, Wade Watts escapes his grim surroundings by spending his waking hours jacked into the OASIS, a sprawling virtual utopia that lets you be anything you want to be, a place where you can live and play and fall in love on any of ten thousand planets. This review of Ready Player One of what I think about the story.

And like most of humanity, Wade dreams of being the one to discover the ultimate lottery ticket that lies concealed within this virtual world. For somewhere inside this giant networked playground, OASIS creator James Halliday has hidden a series of fiendish puzzles that will yield massive fortune–and remarkable power–to whoever can unlock them.

For years, millions have struggled fruitlessly to attain this prize, knowing only that Halliday’s riddles are based in the pop culture he loved–that of the late twentieth century. And for years, millions have found in this quest another means of escape, retreating into happy, obsessive study of Halliday’s icons. Like many of his contemporaries, Wade is as comfortable debating the finer points of John Hughes’s oeuvre, playing Pac-Man, or reciting Devo lyrics as he is scrounging power to run his OASIS rig.

And then Wade stumbles upon the first puzzle.

Suddenly the whole world is watching, and thousands of competitors join the hunt–among them certain powerful players who are willing to commit very real murder to beat Wade to this prize. Now the only way for Wade to survive and preserve everything he knows is to win. But to do so, he may have to leave behind his oh-so-perfect virtual existence and face up to life–and love–in the real world he’s always been so desperate to escape.

A world at stake.
A quest for the ultimate prize. Are you ready?
–Goodreads

Megan and I are part of a YA Book Club for those “a little less Y and a bit more A” and this was our book selection for June. I can’t believe I forgot to review it until now! (Summertime is always crazy and I’ve been MIA for a while for really no good reason at all…obviously I’m sure you missed my reviews 😉 )

The story takes place in the future where virtual reality is more like reality as most people spend their time in the virtual world of OASIS. Initially I was intrigued as it reminded me of the Bruce Willis movie Surrogates which I enjoyed, but this book was even better (granted the general public isn’t too fond of this particular Willis flick, but whatever, I have strange taste in all things pop culture). I loved having a male main character for a change and Wade, oh man, I loved Wade so much. His friendships throughout the book were inspiring. Wade is about a million times more intriguing than I thought a main character that was an avid video gamer would be and the 80s pop culture references that the book revolves on weren’t a hindrance to enjoying the novel at all (yes, while I’m a child of the 80s friends constantly think I slept through them, and the early 90s, since I missed crucial pop culture “events”. Example, in the last 5 years I watched (for the first time) Star Wars, Goonies, and most recently became obsessed with Edward Scissorhands…) I had been worried I wouldn’t “get” any references and that it was a tough read for an actual YA audience, but really it made things really interesting and sparked my interest in other books, movies, music, etc. and isn’t that the point of reading? To take you to another place and spark your interest in other things. I for one most definitely enjoy when this is the case.

I’ve recommended Ready Player One book to a lot of people already: guys and gals, YA readers and non-YA readers, video gamers and board gamers alike. It just came out in paperback this summer, so grab a copy or do what I did and borrow one from your local library. There’s even a contest going on in the spirit of the book with the grand prize being a Delorean! If one of you win, I expect a ride 😉