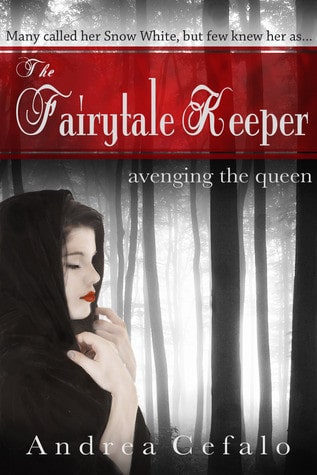 The Fairytale Keeper: Avenging the Queen

Snow White was a pet name her mother had given her, but her mother’s dead now. Adelaide hates that name anyway. A rampant fever claimed Adelaide’s mother just like a thousand others in Cologne where the people die without Last Rites and the dead are dumped in a large pit outside of the city walls. Adelaide’s father is determined to obtain a funeral for his wife, but that requires bribing the parish priest, Father Soren. When Soren commits an unforgivable atrocity, he pushes Adelaide to her breaking point, but if she seeks justice against the cruel priest, she risks sacrificing everything: her father, her friends, her first love, and maybe even her life. -Goodreads

Fairytales have started to become super popular lately in everything from movies, to TV (I’m an avid Once Upon a Time viewer), to, obviously, books. When we first were asked to review this particular book, I was excited for a new take on Snow White, but really didn’t know what to expect. This book review of Fairytale Keeper: Avenging the Queen tells what I feel after reading the book.

The Development of Characters in Fairytale Keeper: Avening the Queen

Adelaide, or Addie, is a solid character. In the beginning she is young, innocent, and naive about life and we get a glimpse of her growing and changing into an inspiring adult throughout the book. Sure she sometimes makes foolish choices, but isn’t that what growing up is about? And Ivo, Addie’s BFF/love interest. Swoon. I am seriously in love with this character. There is so much depth to him and I want to see where his story leads in the rest of this series for sure! Only Augustus Waters from The Fault in Our Stars is above him on my YA list o’ romantical guys from everything I’ve read this year…and maybe last year, except for Hale from the Heist Society books.) Yup.

A Brilliant Book to Enjoy

All in all I didn’t “get” the fairytale angle on this book, it really didn’t seem necessarily for the general plotline, but added some interesting backstory. I’m sure as the series progresses the tie-in with the fairytales will be explored more, but really the story was compelling with or without the added fairytale stories and trying to think about what the tie-in was just made my brain work too hard and not enjoy the book for what it was until I gave that up and just fell in love with the story and the characters. So don’t beat yourself up trying to figure out who everybody is, or how this relates to fairytales you knew as a kid, just enjoy the book, you’ll be glad you did! Also, just as a heads-up, the voice of the book is medieval in both the narration and the dialogue. If you’re not a super strong reader (which is a category that I sometimes fall into…I love books and reading, but I’m not a super strong reader, very slow…have to re-read things a lot, etc.) it may take a little while to get used to, but in the end it’s totally worth it to follow Addie and Ivo’s journey and I wouldn’t let it discourage you for too long!

The story that Andrea Cefalo weaves is intriguing and leaves you hanging wanting more. The “Coming Spring 2013” note at the end is definitely tough to swallow when you want more of the story ASAP after finishing!