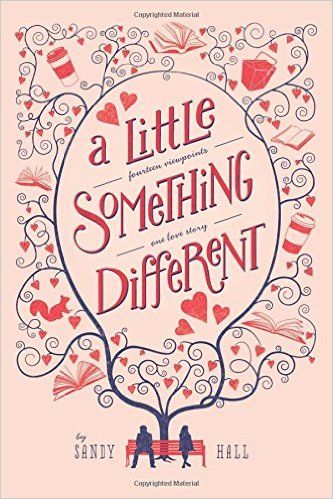 A Little Something Different

I saw this book on a shelf in Waterstones, and I knew I had to have it. I went home right away and put it on my birthday wish list. It wasn’t the plot that excited me initially – it was the way the story is told and now I’m sharing this book review of A Little Something Different to share what I felt like after reading the story. The love story of Lea and Gabe is told from no less than fourteen points of view.

Gabe and Lea aren’t even friends, but it seems like the world wants them to be a couple. From the moment they bump into each other in school, everyone is trying to push them together. Their Creative Writing tutor, their takeaway delivery guy, and even the squirrel in the park. The problem is that Gabe and Lea don’t seem to agree with the majority – why would they be such a good couple anyway?

What Makes  A Little Something Different Interesting

The idea for A Little Something Different is cute. There’s no denying that. And there were parts of it I really loved. I in particular liked the point of view of a Starbucks barista, Charlotte. She was one of the strongest characters in the novel. But since the book is so short, I feel like there’s not a lot of time to get to know the characters, especially as there’s so many. Also, because Gabe and Lea don’t have chapters of their own, they almost become secondary characters, despite every chapter being about them. I also felt like a few of the characters were a little bit over the top. Gabe and Lea’s classmate, Hillary, spends most of her chapters fawning after Gabe and cooking up a plan to get Lea out of her way so she can make a move. Then of course, all of the other characters have a passionate hate for her, as though to point out that she is Evil with a capital E.

Unrealistic Characteristics of the Characters

I think what the story lacks is all to do with the characters. The idea of all the points of view is great, and sometimes it really works. The story is super cute too – I do genuinely believe Gabe and Lea were meant to be. But it’s unrealistic to believe that these characters revolve their lives around a relationship between two students. I think it’s cute that the bus driver keeps up with them, and goes home to tell his wife about them. I think it’s funny that the delivery guy notices that Lea and Gabe have identical orders, despite ordering separately. But I can’t really get behind the idea that a teacher would have such an obsession with two students, or even care if they got together. She also ends up hating Hillary simply for being class partners with Gabe.

This isn’t to say I disliked the novel. Though I found myself irritated at some parts and several of the characters, overall it was a quick and fun read. I mean, there’s no reason you have to like every character – even ones that are supposed to be likable. The book really was something different, and that was refreshing. Kudos to Sandy Hall for a fun and romantic début novel!