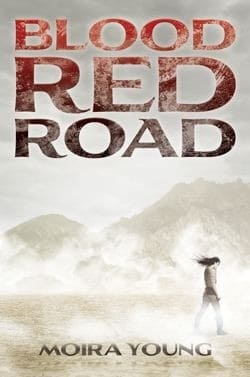 Saba has spent her whole life in Silverlake, a dried-up wasteland ravaged by constant sandstorms. The Wrecker civilization has long been destroyed, leaving only landfills for Saba and her family to scavenge from. That’s fine by her, as long as her beloved twin brother Lugh is around. But when a monster sandstorm arrives, along with four cloaked horsemen, Saba’s world is shattered. Lugh is captured, and Saba embarks on an epic quest to get him back. Suddenly thrown into the lawless, ugly reality of the world outside of desolate Silverlake, Saba is lost without Lugh to guide her. So perhaps the most surprising thing of all is what Saba learns about herself: she’s a fierce fighter, an unbeatable survivor, and a cunning opponent. And she has the power to take down a corrupt society from the inside. Teamed up with a handsome daredevil named Jack and a gang of girl revolutionaries called the Free Hawks, Saba stages a showdown that will change the course of her own civilization.

Blood Red Road has a searing pace, a poetically minimal writing style, violent action, and an epic love story. Moira Young is one of the most promising and startling new voices in teen fiction. –Goodreads

This debut novel by Moira Young is absolutely phenomenal. I completely loved everything about it – the dystopian world, the characters, the story was all spot on and written perfectly. Dystopian is all the rage right now in YA and Young is a leader of the pack.

Our protagonist is Saba, a young girl from Silverlake who has her whole world thrown upside down in a blink of an eye. When her twin brother, Lugh, is taken by four horsemen – Saba must become the strong one and find a way to rescue her brother while also caring for her younger sister, Emmi. As Saba and Emmi make their way across the barren land – they face more terrible things than they could ever imagine. When Saba is forced to join forces with a group of revolutionary girls and a handsome boy named Jack, she starts to find herself and her strength.

One of the biggest things I heard about this book was the writing style – that the way it was written was in the dialect that the characters spoke and some people didn’t care for it. I actually listened to the audio and found it completely engaging. Heather Lind does an amazing job of reading the story in this dialect and even now I can hear her voice and remember the story and characters. I’m not sure if I would’ve loved this book as much if I hadn’t listened to the audio. Lind completely drew me in and I will definitely be listening to the other books on audio if Lind is reading them.

The characters in Blood Red Road are awesome. I loved Saba. She is one kick butt girl that doesn’t take any crap from anyone. Even when she is put into the worst situations, she fights and never gives up. On top of being tough – she is smart and can scheme when she the need arises. I like for my female characters to be tough and smart – and Saba definitely is. I also loved Emmi. She is the typical kid sister who doesn’t listen to anything her older sister has to say even if it’s whats best for her. Saba and Emmi never got along before but, as the story progressed, their relationship changed and you can see why they feel the way about each other. When Saba meets Jack, I immediately love him. There is just something about him – even though we don’t know that much. I can’t wait to find out more about him.

Blood Red Road is a awesome debut book. If you can pick up the audio for it, I HIGHLY recommend it. Lind is superb and if something happens and I end up reading book two instead of listening, I know it will be her voice I hear in my head. This book is amazing and if you haven’t checked it out you are missing out.