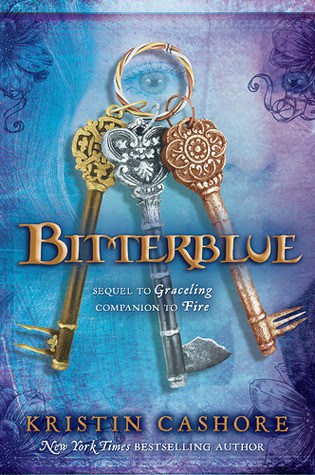 Goodreads
“Eight years after Graceling, Bitterblue is now queen of Monsea. But the influence of her father, a violent psychopath with mind-altering abilities, lives on. Her advisors, who have run things since Leck died, believe in a forward-thinking plan: Pardon all who committed terrible acts under Leck’s reign, and forget anything bad ever happened.

But when Bitterblue begins sneaking outside the castle—disguised and alone—to walk the streets of her own city, she starts realizing that the kingdom has been under the thirty-five-year spell of a madman, and the only way to move forward is to revisit the past.

Two thieves, who only steal what has already been stolen, change her life forever. They hold a key to the truth of Leck’s reign. And one of them, with an extreme skill called a Grace that he hasn’t yet identified, holds a key to her heart.”

FINALLY! I have been waiting for this book for what seems like forever! I loved Bitterblue in Graceling. So innocent, yet fierce. That is a character I can definitely get behind! Kristin Cashore really blew me away with this one. I’ve enjoyed both previous works greatly, but she really kicked things into high gear with Bitterblue.There was so much confusion left after her father, King Leck, was killed, that 8 years later Bitterblue was still trying to figure out who to trust, who was lying to her and how to help the people in her kingdom. I found Bitterblue to be a very kind, thoughtful queen. At times she was a little slow to catch on, but at the same time, maybe I would have been, too, if I’d really been in the thick of things as she was. I ached for her as she delved deeper and deeper into Leck’s mind, as she discovered a secret way her mother tried to communicate with her and as her heart swelled and deflated in the name of romance. I am hoping that in the future there will be something between her and a certain ex-lord. Although I wanted it to happen in this book, it would have been ridiculous and way too fast to have been believable. I just WANT it to happen!! Bitterblue certainly had her hands full in this book. It was just epic, and I hardly ever use that word.

There was just so much meat to this book. Not just the story itself, but you can easily see how much thought and planning went into it. An entire language was created in order to show how crazy King Leck really was. Cashore’s writing was fantastic, and even after such a long break in between books, I had no problem diving right in and getting lost in the story. In my opinion, it blows Graceling and Fire out of the water.