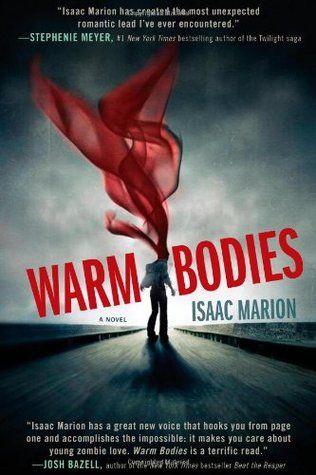 A zombie who yearns for a better life ends up falling in love—with a human—in this astonishingly original debut novel.

R is a zombie. He has no memories, no identity, and no pulse, but he has dreams. He doesn’t enjoy killing people; he enjoys riding escalators and listening to Frank Sinatra. He is a little different from his fellow Dead.

Warm Bodies is a adult novel about a zombie named R who eats a human boy and falls in love with that boy’s girlfriend through his memories. He then proceeds to take care of her and keep her alive.

This is such a different take on a zombie story – who has heard of a zombie falling in love and not eating a human that is close to them? But Marion takes a totally different approach to the zombie story and does an amazing job with it. You know that R is a zombie and you still fall for him – you want him to get better even though you know that that isn’t likely.

Being a zombie book, there were, of course, some OMG that’s nasty! moments but it is so much more than that. From the beginning, you are rooting for R and hoping that he can some how have it all – everything he’s lost when he became a zombie.

This is a great book. Maggie Stiefvater recommended this book on her blog and I didn’t hesitate to pick it up and read it when it came in the mail. Full of hope and love and comedy this is one that you shouldn’t miss.