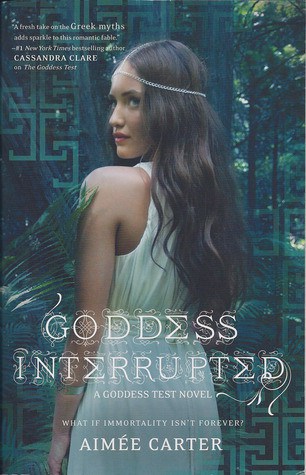 But if she wants a life in the Underworld with Henry, she’ll have to fight for it.

Becoming immortal wasn’t supposed to be the easy part. Though Kate is about to be crowned Queen of the Underworld, she’s as isolated as ever. And despite her growing love for Henry, ruler of the Underworld, he’s becoming ever more distant and secretive. Then, in the midst of Kate’s coronation, Henry is abducted by the only being powerful enough to kill him: the King of the Titans.

As the other gods prepare for a war that could end them all, it is up to Kate to save Henry from the depths of Tartarus. But in order to navigate the endless caverns of the Underworld, Kate must enlist the help of the one person who is the greatest threat to her future.

This book. I loved. I had been hoping this book was coming out soon and literally asked Michelle the publication date just the other day and not even two days later she calls and says “I got Goddess Interrupted on NetGalley”! I was so excited. I devoured this book! I stayed up until 1 am finishing it which is not the smartest idea when you have a 2 and 4 year old that wake up at 5 am! But it was so worth it though.

Kate returns from her 6 months of “me time” in Greece to start her reign as Queen of the Underworld. While she was away James, who is a close friend but wishes he was more, stays with her to keep her company. Unknown to Kate that this will be a MAJOR point of contention with her husband, Henry.

What Kate runs into when she gets home is nothing short of chaos. Calliope, Henry’s goddess brothers-wife, who tried to kill Kate because she was in love with Henry, has escaped her punishment in the Underworld and has released their father/creator who, unlucky for them, is the only person/thing that can kill a god or goddess.

On top of trying to be killed, Kate is having some insecurity issues with her marriage and when Henry gets captured she has to find the one person she NEVER wanted to meet, Henry’s first wife, so she can help free him and save his life and the life of his other brothers and sisters.

If you have not read the first book in this series you MUST before you start this one. If not, you will be completely lost with the names and how the genealogy connects the characters in the story since the series is based off of the god and goddesses you find in Greek mythology. I still had a bit of a hard time keeping track of who was who and how they were connected straight at the beginning of the book BUT by the middle I was all caught up and by the end I was wishing that I had the third book NOW.

My favorite thing about this book, and in the series as a whole, is the characters. Oh, how I love the characters. Henry being my favorite by far. I think its the whole tall, dark, and mysterious persona. Sometimes I just want to throw things through the book at Kate and be like “Girl, open your mouth and TALK to him”. But he is amazing.

I love the world Aimee creates in these books and I’ve always been fascinated with Greek mythology so this series is right up my alley! I can. not. wait for the third book. The end leaves you wanting more and wishing you actually lived inside of Aimee Carter’s head so you would know how these books end!