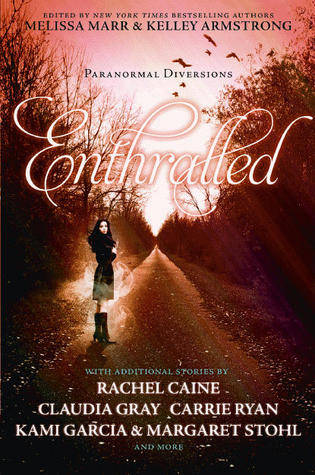 A journey may take hundreds of miles, or it may cover the distance between duty and desire.

Sixteen of today’s hottest writers of paranormal tales weave stories on a common theme of journeying. Authors such as Kelley Armstrong, Rachel Caine, and Melissa Marr return to the beloved worlds of their bestselling series, while others, like Claudia Gray, Kami Garcia, and Margaret Stohl, create new land-scapes and characters. But whether they’re writing about vampires, faeries, angels, or other magical beings, each author explores the strength and resilience of the human heart.

Suspenseful, funny, or romantic, the stories in Enthralled will leave you moved. –Goodreads

This collection of short stories is from the of the best writers in YA. All of the stories deal with some kind of journey – whether it is going somewhere or following the path set out before you. Some of the stories I loved, others I skipped since I hadn’t read the series they go with – but that doesn’t take away from how much I enjoyed this book.

One of my favorite stories was “Bridge” but Jeri Smith-Ready which focused on Logan and his relationship with his brother. I loved the way Smith-Ready wrote the story – in verse and very touching and sad. I’ve only read the first in this series but I loved it and need to read the 2nd asap.

Another one of my favorite stories was “Scenic Route” by Carrie Ryan. This story was set in a zombie filled world but you never see the zombies – it’s the humans in the story that are creepy and need to be feared. I love Carrie Ryan so anything she writes I will read and this did not disappoint.

“Leaving” by Ally Condie was a very interesting story set in a dystopian world. I really devoured this story and wished there was more to it. I needed to know what happened! Condie should definitely write a series based on this story.

A few other stories that were my favorites was “I.V. League” by Margaret Stohl, about vampires trying to get into ivy league schools, “The Third Kind” by Jennifer Lynn Barnes, an action packed story that left me wanting to know more about that world, and “At the Late Night, Double Feature, Picture Show” by Jessica Verday, which was very creepy and had cannibal Girl Scouts in it!

Overall, Enthralled was a great anthology and made me want to pick up a few of the authors’ books that I haven’t read because the stories were so good. Make sure to pick it up when it comes out!