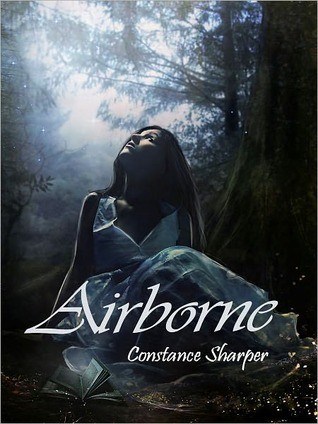 Avery knew she had a knack for attracting trouble, but even she is shocked when a six-foot-something harpie shows up on her doorstep. Coping with the existence of a mythological race? Okay. Unwittingly finding herself in the middle of a vicious harpie conflict? A little less okay. Having to rely on an arrogant harpie boy who gets under her skin? Now that is something Avery isn’t sure she can handle. –Goodreads

When I first read the summary of Airborne, I wasn’t sure what it was going to be about. Harpies? Okay.. Let’s try this. I was pleasantly surprised with this book and the world that Sharper creates. The Harpies are nothing like the Greek mythology versions – which is good since I don’t think that would make a very fun read.

The book starts with our lead character, Avery, coming back to her boarding school in Alaska from summer break in California. While on vacation, she picks up a seashell (or so she thinks) and it cuts her. After a few months the cut is still there – and not any better. When Mason shows up – saying there is magic stuck inside her and that he’s a Harpie – things start to get even more interesting for Avery.

Airborne is a completely new twist on paranormal creatures – one that is fun and refreshing. The story is well written and the pacing is believable. No instalove here – which is very nice! I also liked the main characters – Avery is a very strong lead female which I like to see. Mason, the Harpie, is short tempered and comes across as scary – I would’ve ran from him at first too! But as the story progresses, you get to know more about him and there is a lot to like.

There is so much action and adventure in Airborne, it will definitely leave you wanting to know more about the world Shaper has created. Grounded comes out in September so you don’t have too long to wait!