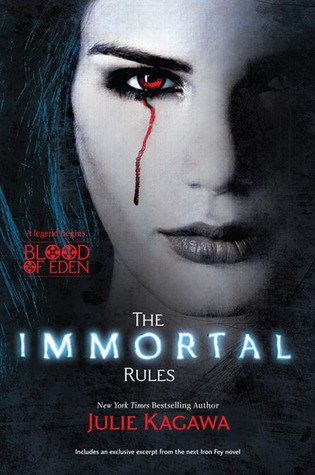 The Immortal Rules (Blood of Eden #1)

Goodreads “Allison Sekemoto survives in the Fringe, the outermost circle of a vampire city. By day, she and her crew scavenge for food. By night, any one of them could be eaten.

Some days, all that drives Allie is her hatred of them. The vampires who keep humans as blood cattle. Until the night Allie herself is attacked—and given the ultimate choice. Die… or become one of the monsters.

Faced with her own mortality, Allie becomes what she despises most. To survive, she must learn the rules of being immortal, including the most important: go long enough without human blood, and you will go mad.

Then Allie is forced to flee into the unknown, outside her city walls. There she joins a ragged band of humans who are seeking a legend—a possible cure to the disease that killed off most of humankind and created the rabids, the mindless creatures who threaten humans and vampires alike.

But it isn’t easy to pass for human. Especially not around Zeke, who might see past the monster inside her. And Allie soon must decide what—and who—is worth dying for.”

I’m just going to start out by saying that my love for Julia Kagawa is never-ending. She became one of my absolute favorite authors with the Iron Fey series. Her ability to create a world so full and captivating, with characters so intriguing (*cough* ASH) is seriously unmatched. I was absolutely STOKED when I heard she was writing a series about vampires. I certainly was NOT disappointed.

Allison, Allie, Sekemoto is one tough chick. She lives as an Unregistered, meaning that she refuses to become blood cattle for the vampires in her city. She and her crew live off the grid, trying to survive by staying indoors at night and foraging for food during the day. Her best friend, Stick, goes along with her even though he is completely terrified of everything and usually gets them into more trouble than usual. This is just the first in a long line of reasons why I love Allie. She is strong, smart, tough yet compassionate, even when she could have done a little better for herself if she lost the “dead weight” others told her to. It is when she’s trying to do something noble for her crew that her life completely changes. There are times when I cheered for her, times I was nervous for her, and times when I could have cried for her. Through it all, though, she maintained her desire to help, instead of hurt.

I absolutely LOVE the world Julia Kagawa created in Immortal Rules. We’ve all gotten a bit exhausted over the whole vampire scene, and it was actually very interesting to find out that Julie had vowed to never write vampire books. I am SO GLAD she decided to forgo that thought and give me (yes, ME!) this book. Her passion for creating new worlds with new rules and totally captivating the reader just shines in this new offering. There is so much depth, heartache and triumph all wrapped up in one that I could not put it down. I highly recommend that you pick IMMORTAL RULES as soon as possible. It is NOT your typical vampire book….thank God! 😉