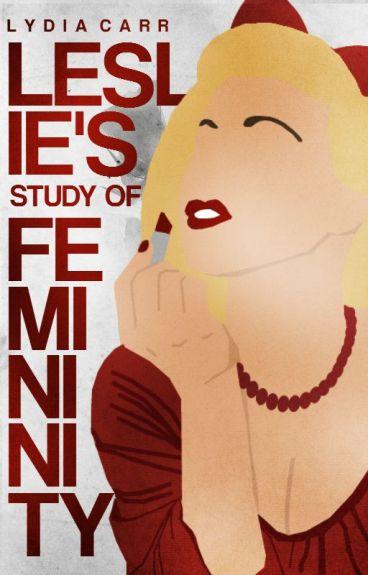 No one can resist reading about a woman in fiction that can kick ass, and Leslie in Lydia Carr’s story is one of those ladies. She may not be a soldier, or a warrior, but she’s a woman that is unafraid to say what she thinks, and I’m totally in love with her. That’s why I’ve read this story no less than three times and I’m sharing this book review of Leslie’s Study of Femininity.

What I love most about Leslie is that she is a totally great role model. In the very first chapter, she announces that she will be spending her Valentine’s day alone, and she’s not ashamed of that. In fact, she’s quite content to be on her own – her evening, she tells her friends, will be one of self-loving. There aren’t many teen fiction books that explore the idea of masturbation explicitly, and I think it sends exactly the right message – that anyone can appreciate their own body if they wish to. I’m all about books that teach teens to have confidence in themselves, and Leslie’s Study of Femininity hones in on the subject.

How Women and Young Girls Can Relate to Leslie

Leslie’s Study of Femininity is a really light-hearted and fun story, but it does also highlight a lot of real life issues that women and young girls, in particular, face. Leslie is seen as a bit of an outsider – she talks about sex, she loves herself, and she’s not afraid to approach a man she likes, or admit to her feelings. All too often, her actions are met with disgust and disdain, especially from male characters and sometimes, unfortunately, her female friends. But what I love about Leslie is that she’s willing to take the time to educate those around her – she knows how she feels about herself, and she doesn’t allow people to try and change her or tell her she’s wrong. We’re missing too many female characters in Young Adult books who would do the same. Leslie is always ready to snap back, and every step she takes made me feel empowered and proud of not only her, but myself.

Leslie proves throughout that she doesn’t need a man, but it doesn’t mean she plans to be alone! Leslie may be the star of the show, but Greg, her love interest, comes a very close second. What I love most about Greg is that he’s different to a lot of the men in Young Adult fiction at the minute. Bad Boys have been in fashion since Edward Cullen, but it’s time they step aside for Nice Boys. Greg is such a sweetie, and there’s nothing more you can ask of a character than to be lovable and kind and supportive. For that reason, Greg and Leslie are one of my favorite couples on Wattpad,

I’m not so much interested in the plot as I am in Leslie. The reason I love the book is because I’ve never identified with or loved a character so much on Wattpad. She talks about the things I wish I had the confidence too. She loves herself, and she’s strong. She’s the role model everyone needs in their life.