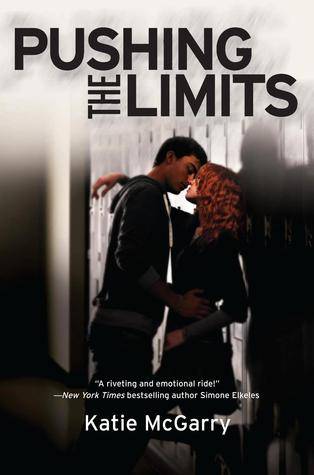 No one knows what happened the night Echo Emerson went from popular girl with jock boyfriend to gossiped-about outsider with “freaky” scars on her arms. Even Echo can’t remember the whole truth of that horrible night. All she knows is that she wants everything to go back to normal.But when Noah Hutchins, the smoking-hot, girl-using loner in the black leather jacket, explodes into her life with his tough attitude and surprising understanding, Echo’s world shifts in ways she could never have imagined. They should have nothing in common. And with the secrets they both keep, being together is pretty much impossible.
Yet the crazy attraction between them refuses to go away. And Echo has to ask herself just how far they can push the limits and what she’ll risk for the one guy who might teach her how to love again. –Goodreads

First off, I have to say that I loved this book so here goes my book review of Pushing The Limits. The story was really well written and kept me engaged and guessing, which normally I can see the ending coming from a mile away!

The story follows both Echo and Noah’s points of view. It’s interesting the way she accomplishes this. She alternates the narrator by chapters. So one chapter you are in Echo’s head and the next is Noah’s. This could have been distracting if not written well but I feel like it enhanced the story! I loved knowing what both were thinking and feeling!

The Characters that Keep Pushing The Limits Intriguing

Echo has secrets. She has scars. She’s pretty messed up. The thing that intrigued me so much is that ECHO didn’t even know what had happened to her. She knew that it involved her mom but the memories were so bad, her brain blocked it out. We found out what happened with her throughout the story as bits and pieces came back to her through therapy.

Noah, I loved. He was the ultimate bad boy. But he used that as a defense mechanism. Both of his parents had died in a house fire. Him and his 2 brothers were put into foster care. The worst part being that they split them up because his brothers were so much younger. You follow his journey as he figures out who he is, how he develops such an unlikely and beautiful relationship with Echo, and how he figures out, at 17 years old, how to put his family back together again.

Pushing the Limits is definitely a book that I would say that needs to be in your “read IMMEDIATELY” pile. I couldn’t stop thinking about the story for about a week after I finished and that, for me, is the mark of a great book!