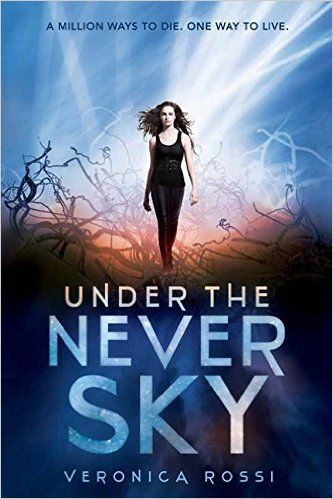 Aria is a teenager in the enclosed city of Reverie.

Like all Dwellers, she spends her time with friends in virtual environments, called Realms, accessed through an eyepiece called a Smarteye.

Aria enjoys the Realms and the easy life in Reverie. When she is forced out of the pod for a crime she did not commit, she believes her death is imminent.

The outside world is known as The Death Shop, with danger in every direction.

Character Development in Under the Never Sky

As an Outsider, Perry has always known hunger, vicious predators, and violent energy storms from the swirling electrified atmosphere called the Aether.

A bit of an outcast even among his hunting tribe, Perry withstands these daily tests with his exceptional abilities, as he is gifted with powerful senses that enable him to scent danger, food and even human emotions.

They come together reluctantly, for Aria must depend on Perry, whom she considers a barbarian, to help her get back to Reverie, while Perry needs Aria to help unravel the mystery of his beloved nephew’s abduction by the Dwellers.

Together they embark on a journey challenged as much by their prejudices as by encounters with cannibals and wolves. But to their surprise, Aria and Perry forge an unlikely love – one that will forever change the fate of all who live UNDER THE NEVER SKY. –Goodreads

Personal Thoughts for This Book Review

I completely loved everything about Rossi’s debut novel. From the world she created to the characters to the action and suspense – Rossi crafts a wonderful story that leave the reader wanting so much more.

In Under the Never Sky, the world is being destroyed by the Aether storms – storms that rain down fire and scorch the earth destroying whatever is in its path.

In this world there are two types of people – Dwellers and Outsiders.

Dwellers live in pods and have access to other “worlds” through a eyepiece that covers their eye.

Outsiders know nothing but hunger and violence – having to fight to survive in the harsh weather conditions.

Outsiders do have one advantage though – most of them have special gifts that help them survive in the harsh conditions.

And there is just so much more to this world that Rossi created. At the beginning of Under the Never Sky, I will admit I was somewhat confused.

My Feelings:  Entering the Book With the Characters

I felt like I was thrown into this world and couldn’t really find my way around – but once the story got going I understood more about what was going on around me. Not really knowing what was going on kept me interested and wanting more.

I think the strongest part of the story were the characters – Aria and Perry were wonderfully written and full of surprises.

I loved that the story was told from both point of views – we would have missed so much if it had only been told from either Aria or Perry’s.

Aria is one very tough chick – she was determined to find out what happened to her mother (even if it meant breaking the rules), she didn’t let anyone push her around, and she fought for her life whenever she had to – even if she wasn’t very good at it.

I love that she didn’t let Perry push her around – even though he could be very mean and intimidating. And Perry – swoon-worthy Perry.

I just loved that boy. You see that he has a kind side to him when he is with his nephew but he also has a hard side – one that kills men without thinking twice.

And I loved the relationship between Aria and Perry – no instalove going on here. Mostly instahate.

It made the story much more enjoyable with a little bit of suspense and wondering.

I need the next book in Under the Never Sky Series immediately and I know it’s going to be at least a year before that happens.

If you love dystopian I highly recommend this book – full of action and adventure, love and loss, and hope and sadness – Under the Never Sky is a superb debut that will leave the reader wanting more.