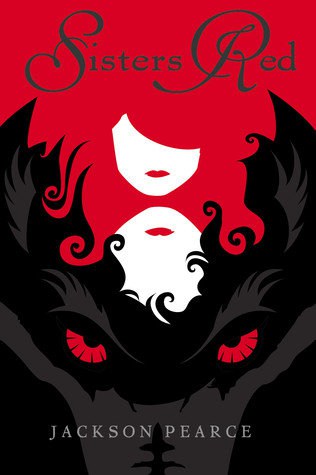 Scarlett March lives to hunt the Fenris–the werewolves that took her eye when she was defending her sister Rosie from a brutal attack. Armed with a razor-sharp hatchet and blood-red cloak, Scarlett is an expert at luring and slaying the wolves. She’s determined to protect other young girls from a grisly death, and her raging heart will not rest until every single wolf is dead.

Rosie March once felt her bond with her sister was unbreakable. Owing Scarlett her life, Rosie hunts ferociously alongside her. But even as more girls’ bodies pile up in the city and the Fenris seem to be gaining power, Rosie dreams of a life beyond the wolves. She finds herself drawn to Silas, a young woodsman who is deadly with an ax and Scarlett’s only friend–but does loving him mean betraying her sister and all that they’ve worked for? –Goodreads

I wasn’t sure what to expect out of Sisters Red when I first started the audio. I was on a road trip by myself and was the only audio left on my iPod from the library. So, I started it. While I didn’t love Sisters Red, I didn’t hate it either. There were things I liked about the story and things that I anticipated happening which made it anti-climatic for me.

The characters are the main reason I kept listening to the book. Pearce made Rosie and Scarlett two tough girls and I was interested to see what happened to them next. Scarlett doesn’t think of anything else but hunting the Fenris while Rosie wants a life outside of hunting – and maybe with Scarlett’s one and only friend, Silas. It was interesting to see the relationship between the three of them grow and change. Scarlett will absolutely break your heart. She is so set on killing the Fenris for what they did to her and her family that she can’t see how her choices effect those of the ones around her. And Rosie – poor Rosie – she only wants a regular life but at what cost to her relationship with her sister?

The retelling of Red Riding Hood that Pearce has created is interesting – but somewhat predictable like I stated earlier. Most of the big “what?!” moments I figured out before they happened – so I really just wanted to get to the end a little faster than what I could listening to the book. The story mostly revolves around the hunting of the Fenris and I felt like some of it could’ve been left out.

The narrators for Sisters Red did a great job. I love that there were different narrators for Rosie and Scarlett – I think it would’ve been harder to keep up with who was narrating if one person would have read the whole book.

Overall, Sisters Red was a nice read – not my favorite but enjoyable even if it was slightly predictable. I did enjoy the audio and would recommend it based solely on the narrators.