Life As We Knew It freaked me out but I couldn’t stop reading! The fact that something like this could really happen and that’s what it will be like is scary in a real kinda way. I told S that if we ever hear of a meteor crashing into the moon we are going to the store ASAP and stockpiling food. (He thinks I’m insane). Keep reading below to see my book review for Life as We Knew It. 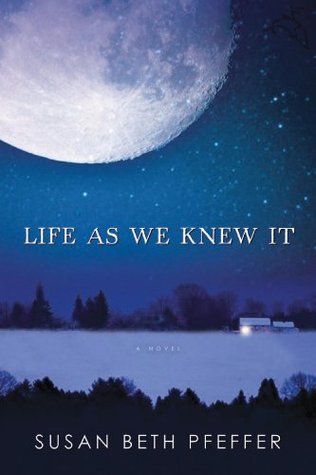 It’s almost the end of Miranda’s sophomore year in high school, and her journal reflects the busy life of a typical teenager: conversations with friends, fights with mom, and fervent hopes for a driver’s license. When Miranda first begins hearing the reports of a meteor on a collision course with the moon, it hardly seems worth a mention in her diary. But after the meteor hits, pushing the moon off its axis and causing worldwide earthquakes, tsunamis, and volcanoes, all the things Miranda used to take for granted begin to disappear.

Food and gas shortages, along with extreme weather changes, come to her small Pennsylvania town; and Miranda’s voice is by turns petulant, angry, and finally resigned, as her family is forced to make tough choices while they consider their increasingly limited options. Yet even as suspicious neighbors stockpile food in anticipation of a looming winter without heat or electricity, Miranda knows that her future is still hers to decide even if life as she knew it is over.

My Thoughts on Life As We Knew It (Continued):

Sometimes it really irritated me that the book was written in diary form. I would think, there is no way she remembers this conversation word for word like that, and then realize, hey, it’s a book – of course, she does. It was the best way to get the story across though.

Everything that Miranda and her family went through in the book was just awful. And the emotions and arguments that they got into were so real. Sometimes I would have to put it down because it was so depressing but then would pick it up again 30 mins later because I had to know what happened.

Even after I finished reading it I thought about it for days. I picked up the next one in the series and can’t wait to start on it. I loved it in a weird, depressing sorta way.