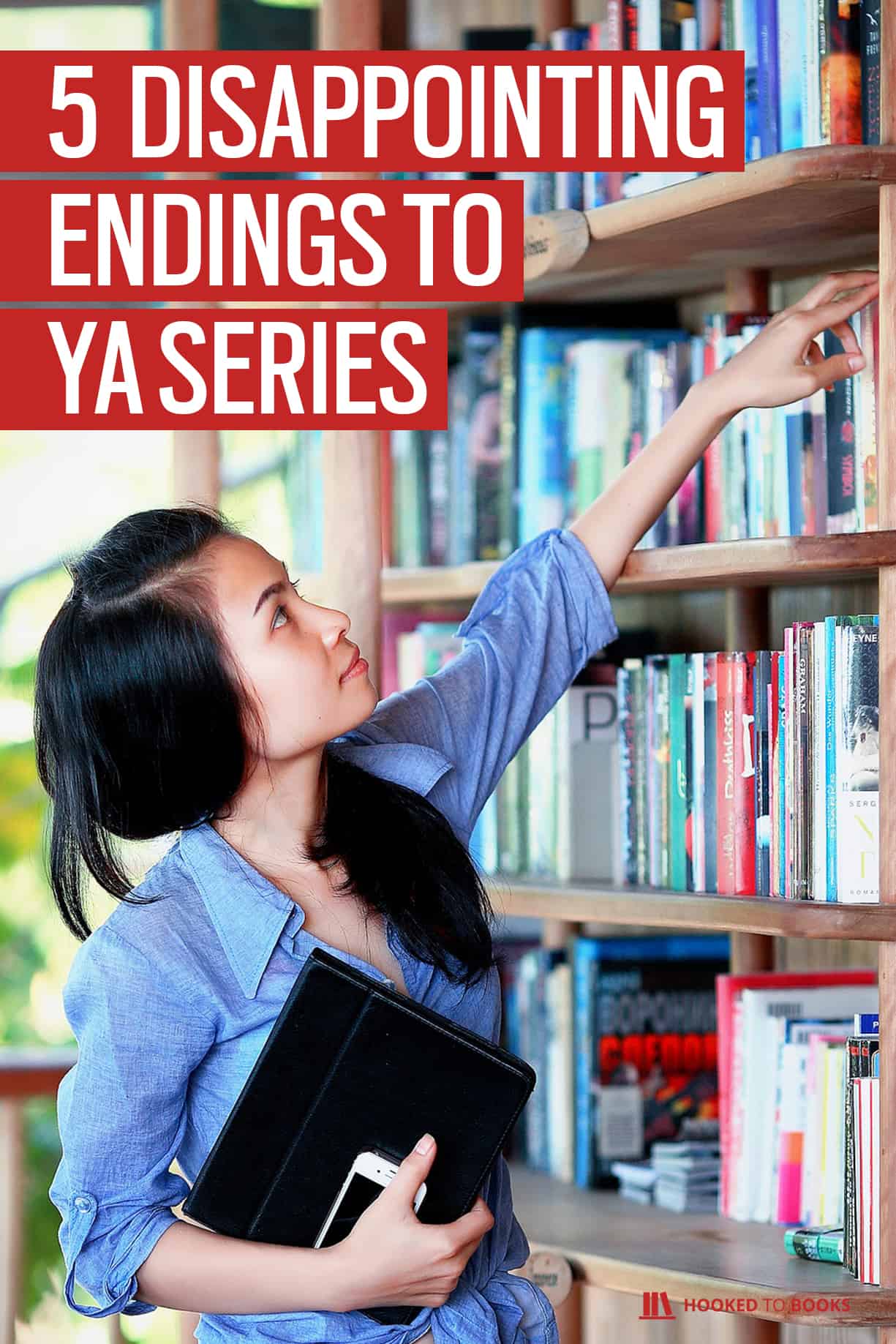 Young Adult (YA) has been such a vast genre in the literary world for the last decade. There used to be one or two good series that would start or end every year, but now there are so many it’s hard to keep track of them all and to feel like you’ve caught up before the next big series hits.

If you’re having trouble deciding which ones to dive into this list might help you determine what to stay away from. If you feel that you’ve read them all and some ended better than others, then this is a great place to commiserate.

Here are my top five YA series endings that filled me with the most disappointment.

We should have known after the awesomeness that was Divergent that anything coming after would not be as good. After I finished reading Divergent, I was so obsessed. I was ready to go out and get a bunch of birds tattooed on my collarbone or a tattoo of erudite on my wrist. I’m super glad I didn’t because the rest of the series was just not as good.

The second book, Insurgent, left us with Tris on the run through the city wondering what to do next. The reader is left wondering that too. Eventually they decide to leave the city and the gate surrounding it, and finally, we are getting somewhere.

Allegiant was a giant let down in this regard. It turns out the big mystery was that it was all an experiment to make people genetically perfect. It turns out humans can’t be (surprise): it’s too hard, and we’re all hardwired to be selfish.

So the big mystery was a bit of a bit snore. Also, the book goes from Tris’ main perspective to trade off narratives between Tris and Four. I HATE THIS. If you’re going to start with a narrative storytelling style, you better end with the same manner. Can you imagine if in Mockingjay we suddenly start getting first-person point of view from Katniss, Gale, AND Peeta? Urgh.

There was another reason fans were disappointed though spoiler Roth kills off our main character at the end. Kind of a big no-no for YA dystopian novels. I liked this part a lot and applauded Roth’s bravery in making this decision. No ultimate sacrifice had to be made, but then OH WAIT some nonsense has happened and even though the sacrifice was made (Harry Potter, Throne of Glass, etc.) turns out they can live, and it’s all good.

Essentially, if the only thing I liked about the end of a series was that the main character died then, that’s kind of all you need to know.

The Mortal Instruments series ended with the City of Glass. That was a great series ending and was honestly wrapped up well enough that there was zero need for more in the series. However, since Clare’s paycheck depends on pumping out Mortal Instruments side stories nowadays, I should have known we were in trouble when she announced the trilogy was not going to end there, but there would be three other books.

I saw the problem right away when I went to pick up the sixth book from the store. It’s the size of the bible. It clocks in at 725 pages. You had five books to tell the story. There is no reason that the supposed ‘last book’ (I say this because she KEPT GOING with all these characters after this), needs to be THIS LONG.

The previous two were okay but not as good as the first three so I was already hesitant. This one took me so long to get through because there was just so much going on in it. There were too many characters that all had a different job to do.

There were characters brought back in from a PREQUEL series, so if you didn’t read those you were probably confused. New characters were also introduced in between all that and then you also have the end of the world is going on, but everyone is more concerned about their love lives instead.

Eclipse was a beautiful ending to a series that brought me solidly into the YA world in 2008. I’ll always be thankful to Twilight for that. Though, Eclipse had a solid ending storyline. Bella finally chooses Edward over Jacob and announces her intent to marry Edward to her Dad — done. I don’t need to know if Bella will ever become a vampire or if her and Edward we will live happily ever after. I like not knowing actually.

Instead, Meyer and her publishers decided that even more money would be better, so they scrapped the three-book contract and pushed it to four. This caused Meyer to change her ending to Eclipse and instead write a ginormous, weird as all fourth hell book about vampire pregnancy and half vampire/human babies. What made Twilight so enticing was Bella and Edward’s love for each other. Now we have a creepy baby that grows too fast to deal with. Great.

I loved Fallen, the first book in this series. The second book was not as good though, and the third book read like a standalone, which was kind of insane and has only been pulled off well once that I know of (Tower of Dawn, Sarah J. Mass).

I was under the impression that it was the last book though so I figured I’d do it a solid a finish up the series. Except for WAIT! There’s one more! Is there something about fourth books that don’t make any sense?

This one was pretty garbage. The story across the series is a mess. Questions are left posed and then unanswered or forgotten about completely. In the last book you hope that everything ties itself up nicely, but Kate seemed to forget what she was even writing about at times. Overall it wasn’t a great series and a massive disappointment for a first book that started so well. A bad sign is when you get halfway through the final book and hope everyone ends up dead (of course they don’t – it’s all happily ever after).

This was an exciting series in regards to the plot. Our main character Lena started boring but was in an exciting world, so this enticed many readers to stick around. The second book was great too, which helped with getting people to stick around for that final installment. Lena starts to come into her own in the second book, and we see some great character development on top of an excellent storyline.

The third book… well, if you like to read about people camping and walking I suggest you read Lord of the Rings. Moreover, if you want to read a final book about a character finally finishing a character arc then go read pretty much anything else.

The only saving grace was Lena’s chapters are put in between her best friend Hana’s chapters, a character who for some reason gets their chapters suddenly. It’s a move I usually don’t like, but in the case of this book, it was a reprieve from Lena so I’ll take it.

Lena spends the entire book jealous that a guy she likes is talking to another girl who has had a traumatic experience. If you think that makes her sound like an unfeeling selfish jerk well don’t let me stop you from considering it. I mean, exciting problems are going on in this book and a cool concept for a storyline but when I have to listen to someone mope around while more critical stuff should be happening…well, I’m out.

Holly is an enthusiastic reader of all genres. When she’s not reading, she’s hosting a podcast about romance books or writing weekly updates to monthly challenges on her website. She’s an unapologetic Slytherin.